In most cases, when building simple reactive systems, it is enough to place a source for every device or every file you are accessing, as well as a set of transforms, sinks and combinators representing all the operations you need to perform on the data.

However, sometimes you may need to build systems that deal with an unknown number of sources. For example, imagine you wanted to create a workflow to merge together many video files. If you knew beforehand how many files you will need to combine and where they are exactly located, you might use the Concat operator to design a workflow like the following:

But what if you did not know beforehand how many video files you will need to combine, and you wanted to merge all these videos without having to manually place a source node for every file?

Suppose all you had to get started was the EnumerateFiles source. This operator creates an observable sequence that will emit all the file names in a folder, one after the other.

Whenever an operator receives or emits a sequence of sequences, we call it a higher order operator. These operators play a particularly powerful role in the Bonsai programming language so it is useful to describe them in some detail.

A metaphor for higher-order operators

The social network metaphor introduced at the beginning of this guide can be extended to describe higher-order operators. If observable sequences are accounts in a social network, and data items are posts published by these accounts, you can describe the video concatenation example in the following steps:

For example, the video concatenation workflow can be implemented in Bonsai as follows: 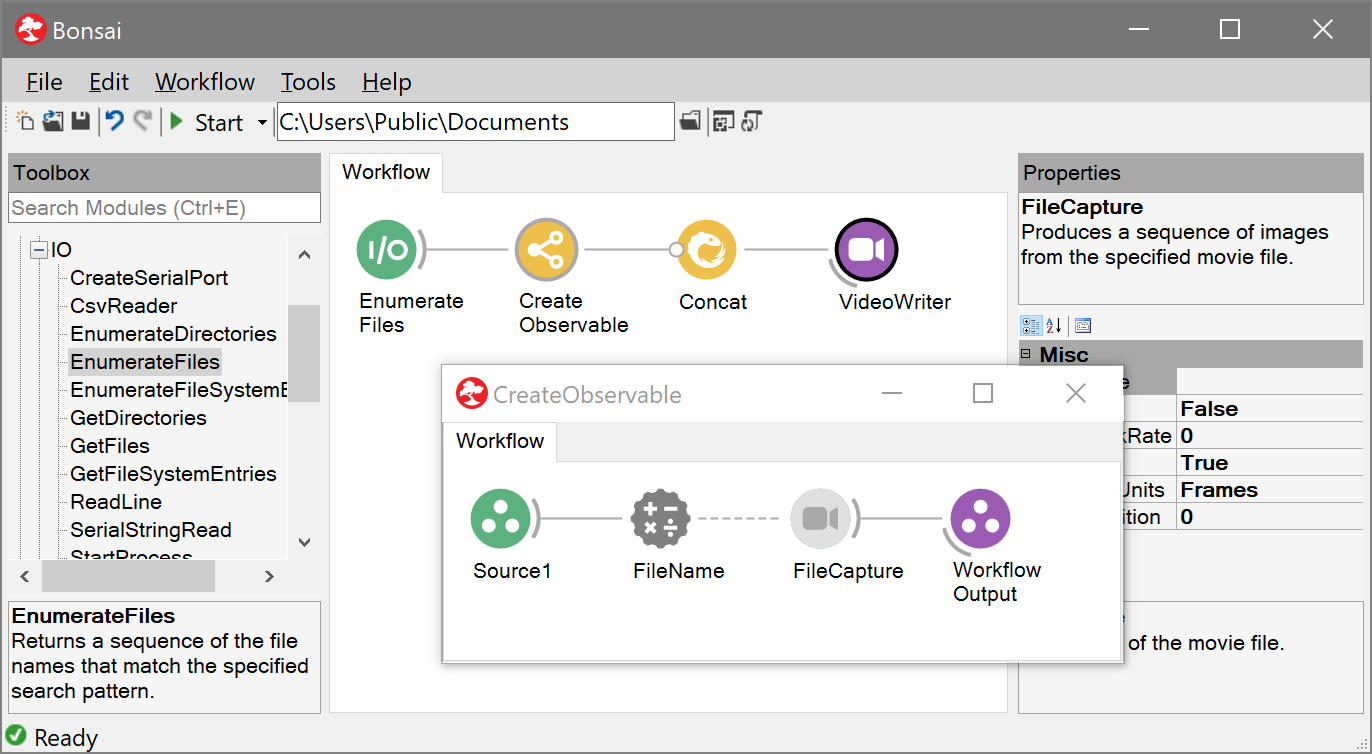 The input to the node group – represented by the Source1 operator – is a sequence containing the individual items received by WindowWorkflow. In this case, it is a sequence with a single item that returns the file name emitted by the EnumerateFiles source. We use an externalized property to assign this value to the FileName of the FileCapture node, so that the correct video is accessed. Finally, the output of the node group determines the type and timing of the items emitted by the created sequence.

ProTip: The WindowWorkflow operator creates new sequences for every input notification. However, it does not automatically subscribe to them – they are latent. No data actually flows through the operators in the node group until some other higher-order operator – in this case Concat – actually takes these sequences and subscribes to them.

Marble diagrams can also be extended to describe the behaviour of higher-order operators. Emitted sequences are represented by diagonal timelines branching off the main operator timeline. The start of the branching sequence represents the time at which that sequence was emitted.

For example, the WindowWorkflow operator used to convert file names into sequences of video frames is described below:

This marble diagram makes clear that the operator reacts to each file name notification by creating a new observable sequence. In this case, each created sequence will emit all the frames in the specified video. In general, however, this operator can produce all kinds of sequences, determined by the particular combination of operators inside the node group.

Finally, operators can combine sequences of sequences into a single sequence by collecting all the items from each sequence. There are multiple ways to perform this combination. For example, the Concat operator subscribes to each emitted sequence one at a time, advancing to the next sequence only when the previous one terminated successfully.

This behaviour is described by the following marble diagram: